OUR PEOPLE, OUR SOCIETY AND OUR RESPONSIBILITY
A STEP TOWARDS HELPING LEPROSY PEOPLE

Even today, when leprosy is curable, the age-old stigma attached to the disease has not been rooted out from the minds of the people. Stigma creates many hindrance in the lives of the people affected by leprosy; thus hamper their physical, psychological, social and economic well-being. Lack of knowledge and information, age-old beliefs, fear and shame etc. support stigma. Stigma leads to irrational behavior towards people affected by the disease. It is hurtful and leads to discriminatory practices. A large chunk of people still believe that leprosy is inflicted by a divine curse. People affected by leprosy are avoided; as they are assumed to be sinners, and those around them do not want to incur god’s wrath or go against the celestial punishment, by helping the leprosy infected people. Even today, leprosy strikes fear in the minds of people as a disfiguring, contagious and incurable disease – the result of divine punishment for sins. The society continues to stigmatize and discriminate against people affected by leprosy.

Leprosy was once feared as a highly contagious and devastating disease, but now we know it doesn’t spread easily and treatment is very effective. Despite effective treatment, leprosy is one of the world’s most stigmatized diseases, and people living with leprosy-related disabilities in many countries are shunned, denied basic human rights, and are discriminated. The stigma affects the well-being of those with leprosy, contributing to the cycle of poverty in the affected regions.

Shradhanjali took initiatives in four major Leprosy Colonies in Bhubaneswar, namely; Ramakrushna, Gokhibaba, Netaji and Jagannath. We visited to those colonies, organized Community Outreach Camps, supported to register and enlist their names for the procurement of their Unique Disability Identification Card (UDID) and handed over their details to the District Social Security Officer, SSEPD Department, Khordha and made necessary communications with the concerned Govt. officials to help those vulnerable people to avail the Govt. benefits.

Life of a Leprosy Person is very difficult. Social boycott affects us more than the pain from the disease. People hate us, feel reluctant to interact with us and avoid coming to our colony. Most of the time, people even do not realize our problems. We are helpless and are leading a miserable and pathetic life. And we have to live like this till the end of our life.  Living in such a condition is really painful but do not see anything beyond this. 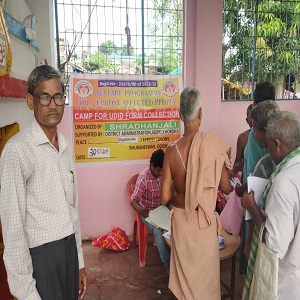